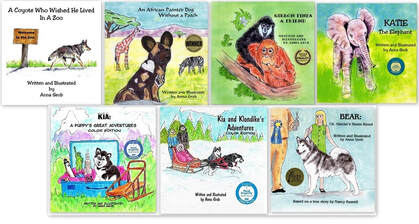 Welcome, and thank you for visiting my website.
Anna Grob's books are dedicated to teaching children about animals and nature.
Feel free to browse through the pages and enjoy the fun.
A portion of the proceeds from all of my work go towards helping animal or children's charities.  :) 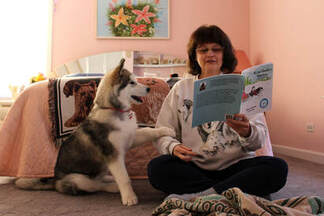 My new puppy Kenai, enjoying one of my stories. 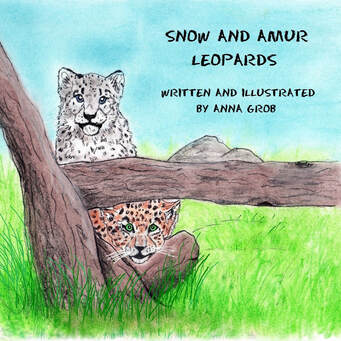 Snow was about to make her first public appearance at the zoo. But where was she? Who was making the noise next door? Amur uses his natural instincts to hunt, but his mother keeps him from climbing high up in the tree. Finally, he sneaks to the top when she isn't looking. He panics and cries for help. What did he see? Who will save him?
Find out in this exciting adventure.

Anna’s new book, Snow and Amur Leopards, tells the story of how two female leopards and big cat keepers care for two leopard cubs to help them reach adulthood. Highlighting the survival skills mother leopards teach their cubs (stalking), and the adaptations of each species to survive in their habitat (camouflage). Expressing the similarities and differences between the two different leopard species, while calling attention towards the real threats the vulnerable Snow leopards and critically endangered Amur leopards are facing in the wild- habitat loss, poaching, and human conflict.  - Christy MO, Carnivore Animal Care Specialist
Snow and Amur Leopards on Amazon

Hooray! I just got the news that both of my Kia stories are Award Winners! The Kia/Klondike book won First Place for Best Interior Design, and the Kia puppy story received an Honorable Mention for the Other-Non-Fiction Category. The Best Interior Design award means so much to me as a self-publisher, which honors not only excellence in literature but also recognizes creativity and hard work for the design of a book.
Such a HUGE honor!
Also, Bear: Ch. Glacier's Storm Kloud won 2nd place for Graphic Design/Designed by Entrant from the Illinois Woman's Press Association for the 2020 Mate E. Palmer Communications Contest 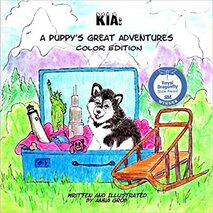 Blk/ Wht Edition was Released January 12, 2019
Kara can't wait to bring home her new puppy, Kia. She has big plans for the puppy. However, Kia has ideas of her own. Will Kara be able to work with her in the obedience ring? Can Kia become the sled dog that she was bred to be? Who will save the man and his daughter from drowning in Lake Michigan?
Find out in this exciting adventure.

Kia: A Puppy's Great Adventures, is mostly true to life events about the journey of a puppy's first year. The lovely illustrations bring Kia's wit and charm to life. This inspiring story brings hope and encouragement to young readers as they find ways to enjoy working with their own dog's given talent and purpose.
Kia: A Puppy's Great Adventures, is book one in the Kia's Adventure Series.
Kia Puppy Adventure Amazon 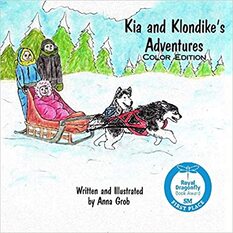 Blk/Wht Edition was released April 22, 2019
Kara Peterson's dream of working with her dogs is about to come true. Suddenly, Kia senses something wrong and bolts down a hallway. Was Kia on a mission? Where did she want to go, and why? Klondike's clowning around in the obedience ring has Kara worried. What will the judge say? Will Klondike be disqualified? Find out in this exciting new adventure.

Kia and Klondike's Adventures is the second book in the Kia's Adventure Series.
As the events continue, Kia and Klondike demonstrate how well-trained dogs can make a difference in the lives of people. The detailed illustrations and characters in the story get readers involved in the fun and excitement of dog sports and help solve problems along the way. 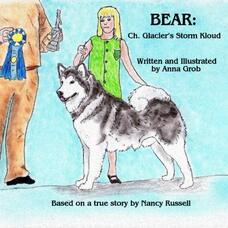 How many dogs can claim they were patted by a prince, and kissed by a real princess? Nancy Russell’s life changed forever when she saw the most beautiful dog in the show ring. Bear had many “Firsts” in the history of the breed. However, there were surprises along the way. Will Bear receive his obedience title? What will happen when the Russell family finds out their beloved show dog is not on the plane? Who will reach out to the young boy standing in the corner? Find out in this real-life adventure.

Bear: Ch. Glacier's Storm Kloud, is a true story about an extraordinary show dog from Wisconsin. Readers of all ages will enjoy the character's adventures while learning about the world of dog shows. The delightful illustrations bring out the loving charm Bear brought to the show ring.
A portion of the proceeds from the book will go towards helping homeless Alaskan Malamutes.
Bear's Book on Amazon 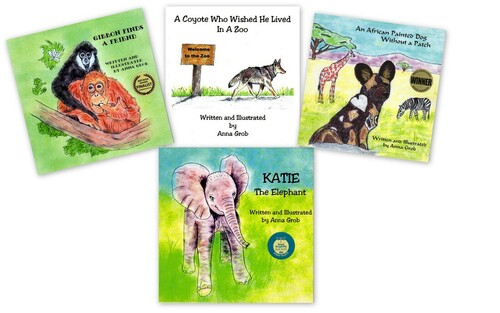 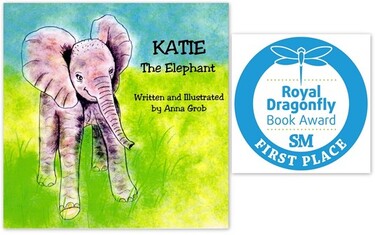 Released April 14, 2018
Katie The Elephant
ISBN-13 978-1985783522
ISBN-10 1985783522
Now available on Amazon
Run, Katie! Run! After poachers had captured Katie from her home in Africa, she was sent to America to live in Farmer Zack's barn. Luckily, Dean and Nicole were able to rescue her, yet, they ran into some problems along the way. Where would Katie live? Who will be her companion? Will she ever find a loving herd of her own.
Find out in this exciting new adventure.

Katie The Elephant, is a heartwarming tale, highlighting the close bond and social behavior of elephants. Children will enjoy the adventures of the character while they learn about the challenges elephants face both in the wild and captivity.

You can order a copy of the book through Amazon by clicking the button below, or go to the contact page to order an autographed copy through me.

Katie the Elephant on Amazon 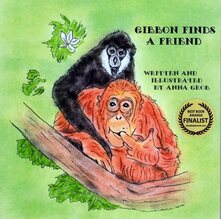 SWOOP! After people had stolen Gibbon out of a Vietnam rain forest, he finds himself hundreds of miles away from home. His unique friendship with an Orangutan teaches him the secrets within the Asian rain forest. But how can she help him get safely back home without getting recaptured by the people.
Find out in this exciting new adventure.

Gibbon Finds A Friend, is a delightful story with detailed illustrations capturing the unique behavior of primates. Children will be fascinated by the character's adventures while they learn about the challenges animals face in the rain forest of Asia.


Reviews for Gibbon Finds A Friend

Anna Grob's new book, Gibbon Finds a Friend, is an enlightening narrative that exposes the very real threats that much of the world's wildlife faces.  Not only does she expose the consequences of capturing animals for the pet trade, she also reveals the devastation the Palm Oil industry is causing.  Along with these realities she weaves in a variety of both Gibbon and Orangutan behaviors, as well as how circumstances can create some unique friendships in the Animal Kingdom.  Anna also touches on the positive impact researchers can have on wildlife and the environment.
-Karen Caster, Primate Keeper at the Little Rock Zoo and Nominee for the Gibbon Behavioral Advisory Group

An African Painted Dog Without A Patch

My second book, An African Painted Dog Without A Patch, has won the 10th Annual National Indie Excellence Book Awards under Children's Non-Fiction category.
I am excited beyond words. Yippey!!!

The book now has a permanent Awards sticker added to the front cover.
An African Painted Dog Without A Patch is my second book in the Wild Animal Survival Series.

How can a young African Painted Dog explore the grasslands of the Serengeti without getting into trouble? Patch thought he had the answer, until the lions showed up.

An African Painted Dog Without A Patch, is an exciting tale about a mischievous painted dog who learns life lessons through his experience away from his pack. The delightful illustrations add a touch of humor to the story. Children will love the wildly fun adventures of the character while they learn about the magnificent animals.

A portion of the proceed from the book goes toward protecting the pack for the Painted Dog Protection Initiative.  Go to the link under My Books to learn more about this book and how you can help African Painted Dogs.

A Coyote Who Wished He Lived In A Zoo

My book, A Coyote Who Wished He Lived In A Zoo, was nominated for a Juvenile Literature Award by the Friends of American Writers Chicago.
I am very excited about it.

More News
There is an article in the Suburban Life Newspaper about me as a volunteer at the zoo and how I was inspired to write children's books. There was also an article with my past author visits and coyote book. To read the full articles, go to My Books and "A Coyote Who Wished He Lived In A Zoo" in the menu bar. 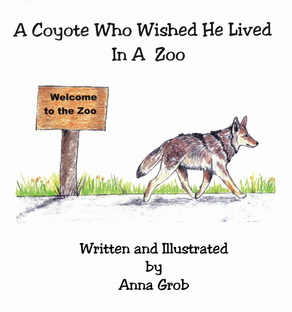 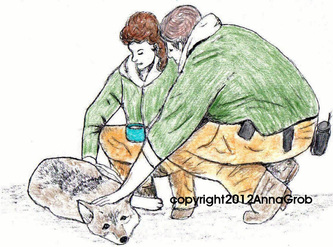 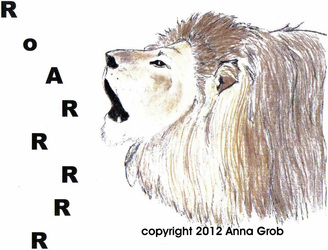 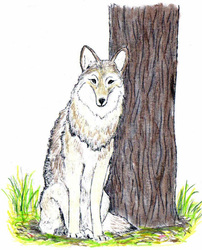 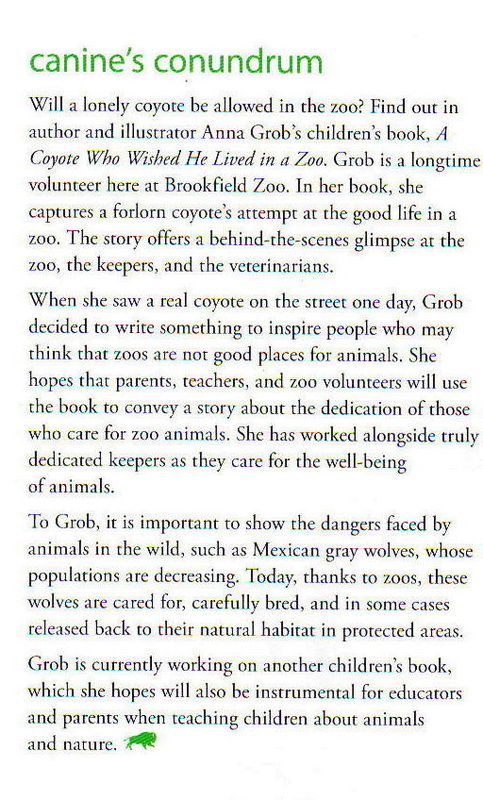 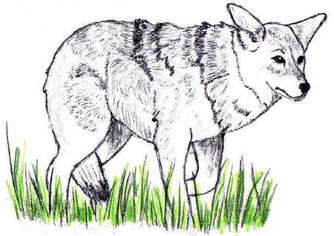 Jessie faces many challanges in the wild
My book a Coyote Who Wished He Lived in A Zoo, has been teamed up with Smile Amazon. This means that when you purchase my book through them, a portion of the proceeds goes to your favorite charity. Just go to http://smile.amazon.com choose your charity and type my name or book title in the search bar. Is is that easy,

To order A Coyote Who Wished He Lived In A Zoo, from Amazon, Smile Amazon, or Barnes and Noble,  click the appropriate button below.
Smile Amazon
Amazon
Barnes & Noble

Click play on the audio below to hear an interview for my book A Coyote Who Wished He Lived In A Zoo on the Children's Author Radio Show.

Note: I am the NEW publisher for the book.